Mr. Worrier stands on shore and stares at the water. He analyzes nature’s strategy and studies rhythm, motion, balance. He knows the crest reveals height as it contrasts the trough. The current keeps motion moving and moving and moving as he remains still, only backing away from the cool water when the waves rush too close.

Mr. Warrior grabs his towel and his sandals as he wakes early to rush toward the shore. The coast is his friend. The sudden water feels like ice, but he tells himself that adjustment only takes a few minutes, that waves are crucial at the moment, that each phase gives him a new chance to ride. 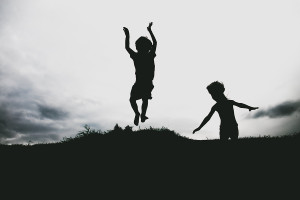 Mr. Worrier thinks about statistics, knowing skin cancer occurs when bodies receive too much sun. Mr. Warrior thought about the danger and decided to cover his body with sunscreen before diving in.

Mr. Worrier remembers stories about sharks and stingrays and jellyfish. Mr. Warrior recalls how stats remind him of safety at sea compared to danger on the highways.

Mr. Worrier recalls how a storm came the last time he stood near the beach. He expected the lightning to hit him this time. Mr. Warrior remembered to listen to the weather report before hitting the waves. He learned from previous mistakes to be aware of the air, but to never let fear get in the way.

I wonder what Mr. Worrier thinks about when he prays. Does he refuse to ask for miracles because previous prayers went unanswered? Does he choose to avoid deep commitment because of past failures? Does he stand on a spiritual shore, refusing to dive in?

I wonder what Mr. Warrior thinks about when he prays. Does he ask the Ocean Maker to send miracles ashore no matter the results of previous currents? Does he rush into deep water even though he almost drowned there before? Does he race like a child into the sea, trusting the Wave Power to create another miracle just in time?

I wonder how many times the Mr. Worrier in me rules over the Mr. Warrior in me. Will I rebuke the fearful, reluctant doubter and dare him to move away? Will I reward the faithful, reckless believer and allow him to dive today? Will I miss a current miracle, a wave toward wonder, a carrying of energy, a motion against this world’s flow? Or will I allow Mr. Warrior in me to end the stare and take the dare, diving into a tide of truth?

October is #PastorAppreciationMonth. Write thank you notes. Pray. Speak words of encouragement. And purchase copies of Pause for Pastors to give away as gifts to clergy.