Travel back in time with me to a quiet shore on the Sea of Tiberius. The sun’s rays have just begun chasing the gray dawn away, casting light upon a ragged band of disillusioned disciples rising and falling with the waves. John 21 hints that the small crew had caught about as much sleep that night as fish. And so, with empty nets in their hands and tired eyes in their heads, they turned and saw through the thinning haze the form of a man standing on the sand, watching. After a divinely appointed déjà vu (see Lk 5:5-8), the weary group sat down to eat with that man, Jesus. No one said a word. Why? Not too long before, all the disciples had scattered and fled, leaving Jesus utterly alone before those who would eventually crucify him. Earlier still, one of those disciples named Peter had vowed unyielding faithfulness to his Lord (Jn 13:37). As most of us know, and as all of us have experienced ourselves, his creed had far exceeded his deeds. Despite his bold promise to stand unto death, Peter wilted before a servant girl while warming himself around a charcoal fire (Jn 18:15-18). 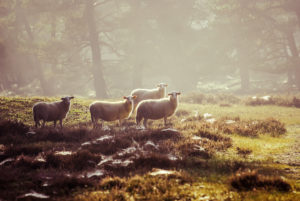 Did a guilty silence hang in the air while those disciples, Peter included, gathered around yet another charcoal fire (Jn 21:9). Whatever the atmosphere only one voice cut through the soothing sound of the waves breaking upon the sand. The voice belonged to Jesus. The Savior interrupted the deafening silence and crashed uniquely upon the ears and heart of a despondent Peter, “Simon, son of Jonah, do you love me more than these?” (Jn 21:15). While some hold that “these” refers to the fish, I am sure there is good reason to believe otherwise, and that reason cut to Peter’s heart: he who had boldly promise courage above all the other disciples (Mt 26:33) now needed humility and comfort more than all the other disciples.

Three times Peter had denied the Lord Jesus. Now that same Jesus gave Peter opportunities to reaffirm his love three times. What did Jesus require from Peter to demonstrate his love for the risen Savior? Not bloody-kneed penance. Not an earth shattering crusade. It was, in fact, gentle care for lambs and sheep. John gave us this passage not to argue about different Greek words for love, but rather to show the Great Shepherd restoring one of his under-shepherds in order to care for the flock. Take some time with me now to consider two aspects of this conversation: first, what Jesus reveals about his own character and concern, and second, what Jesus expects from those who enjoy the privilege of shepherding any part of God’s flock.

Earlier in John’s Gospel, Jesus laid claim to the special title Good Shepherd (John 10). There in contrast to the thief who comes only to steal, kill, and destroy, Jesus comes to give life, and that abundantly. He leads his sheep to lush, nourishing pastures of green and refreshes them with the pure, still water of life (Ps 23 anyone?). In contrast with the heartless, hired servants who use the sheep for themselves, Jesus gave himself for the sheep. Amazingly, Jesus does not overlook a single sheep, for he calls each by name and they follow him. Not even the most terrifying powers of Satan will snatch the weakest lamb from his nail-pierced hand (Jn 10:28). Do you think about Jesus’ character in this way? He stopped at nothing to save them. And now, firmly and faithfully committed to his sheep, he tenderly and gently leads each and every one of them to eternal life. That included Peter the denier! Concerning the events of this world, Jesus has no higher priority, no greater concern, than the welfare of his sheep. In light of that, I have one simple and searching question: shouldn’t pastors and elders share the exact same concern?

Back during the fish-and-bread breakfast conversation, Jesus told Peter to show his love to the Great Shepherd by feeding and tending to his lambs and sheep. Feed and tend. What does that mean? First, Christ’s lambs and sheep desperately need the nutritious diet of his Word. You will find the words of life nowhere else in all the world (Jn 6:68)! The Bible alone contains the Lord’s rich milk for little ones and delicious meat for mature ones (1 Pet 2:2, Heb 5:14). Movies do not, entertainment does not, culture does not. A shepherd after the heart of Christ will saturate his life and work in the truth of the Spirit-inspired Word. His prayers, preaching, counseling, visiting, encouragement, and correction must flow from and align with the Word. Only then will Jesus’ little lambs grow into sheep, and the older sheep flourish as they age. Second, Christ’s lambs and sheep need the protective service of their shepherds. In his teaching Jesus identified one chief enemy of his sheep: the wolf. The wolves wreaking havoc upon the flock by persecuting and deceiving, with that second tactic actually doing more lasting damage. But wolves meets their match when they run headlong into the shepherd’s staff of truth, the same staff he uses to tend and protect his flock.

Although Jesus spoke with Peter by the seaside many years ago, the implications have spanned the centuries until now. If you have the privilege of being a shepherd in one of Jesus’ churches, take these words to heart. Feed your sheep with the Word of Truth. Tend to and defend your sheep with the Word of Christ. Shield the flock from the fear of death with God’s promises of life. Rescue them from the chains of sin and shame with the message of forgiveness and holiness. If you are one of Jesus’ precious sheep not called to be a shepherd (and most aren’t!), then listen to and pray for your shepherds. Do they speak the words of Jesus? True shepherds will occupy themselves far more with nourishment than with numbers, with speaking of Jesus rather than speaking about themselves. Do they lead you to feast ultimately on him? If so, hear them, even if they tell you things you do not want to hear. Jesus concerns himself with the good of his sheep and has sent shepherds for that purpose, even those who once denied him.