A Poem: Death and Life from Adam to Christ

one man can change the future.

one thought, one decision, one act.

i am here because many individuals

through their thoughts, decisions, actions.

david repented and asked for mercy.

augustine used his intellect to search out the riches of God. 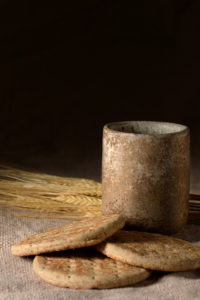 a mother. a teacher. a pastor. a friend. a stranger.

an individual can influence the world.

his thoughts, his decision, his action.

no fruit could have tasted so delightful

that poisoning the human race mattered not.

and his behavior influenced all under that name.

law was given after the fact of sin

to reveal the principle at work in the world.

death through the disobedience of one.

His thoughts, decisions, actions were unto the Father.

the agonizing pain of the cruel cross was worth it

to work the pardon of the human race.

the reign of grace and life.

one Man’s obedience, even to the death.

His name? “Anointed One.”

and His love was proof of that sacred title.

paying the penalty, moving men from guilt to grace.

abolishing the principle at work in the world.

life through the obedience (unto death) of One.

will i choose sin or grace?

stay in adam and die separated from God

or abide in Christ and live in fellowship with God?

i must remember His death and receive His life.

i take the bread.

in need of mercy, desperate for life,

and swallow the death that brings a resurrection.

i take the cup.

i consider the cross.

because i am so thirsty for forgiveness,

and swallow the life-flow that brings a transformation.

i remember His death and receive His life.

in Him i live and move and have my being.

in Him i am justified.

this man’s obedience through Christ

will change the world,