After the Death and Resurrection of Jesus

Breakfast is my friend.

Breakfast moments remind me of life, of new beginnings, of community, of pausing to eat and talk and think and begin a day. I cherish the morning meals. That honest conversation I enjoyed last week with Charles when we met for breakfast at the Roystonian. That drive through a storm to meet my friend Tom for breakfast in Atlanta before I flew to Orlando and he flew to Japan. That breakfast of questions and ideas as I sat with Greg. That breakfast with Tim as we enjoyed a Saturday together in the neighborhood I had lived in for many years but left almost a decade before than morning. Those many breakfasts of my young years before Mama moved to breakfast in heaven. Those many breakfasts watching our three sons grow up. Those breakfasts over many years in many places with many friends and family members. These healthy breakfasts I eat most mornings alone when home and up very early to write and pray and think.

Each breakfast, I believe, can welcome Jesus. 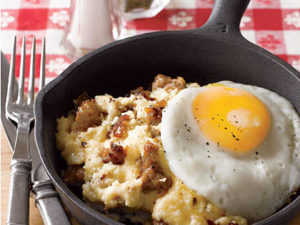 Even when He seems far, far away.

Maybe, that’s how His followers felt after He died.

The fishermen-turned-disciples felt disillusioned. Jesus never established a Kingdom on earth. At least, not the way His followers expected He would. For all His talk, His walk, and His amazing miracles, they had little practical proof of prophetic phrases Christ linked to Himself. From a crowd of seekers to crucifixion by public opinion. From water into wine to a bloody death. His closest friends dropped into doubt as their dreams dashed. Wasn’t Christ supposed to be seated on David’s throne? Had their three years of missionary service done anything at all?

Peter, as usual, got things rolling. However his friends felt, he decided to move on. And, as usual, he made his decision public: “I’m going fishing.” Others joined him. They climbed back into a boat to fish, sitting in the setting where Jesus had found them before. With tarnished dreams, they returned to their lives before Christ. They went fishing.

Watching multitudes dwindle down to just a few discouraged the disciples. It challenged their plan to change the world. Their own cowardice showed during the days of Christ’s death. It shook their beliefs. Tired of risks, they launched in a boat driven by goals easily attainable and measurable.

More was happening though. Christ’s death had not ended the story. A weekend of pain ended with an empty tomb, beginning a season inviting everyone everywhere to receive love from Jesus. He revealed Himself to a few—never notifying them in advance of His arrival. He talked to Peter about the future, talked to Thomas about doubt, and talked to all His followers about why He must leave again.

But He didn’t give specific details.

I like specific details, advance notice, clear guidance, and precise goals to achieve. Jesus chose to voice a general agenda—like love one another, wait, receive the Spirit, and tell the story.

He still seems to lead that way.

That’s what happened for His early followers.

Today’s blog is from Chris Maxwell’s book, Pause With Jesus. You can purchase copies here.