I was hired on pastoral staff after Chris had returned to work. I never knew Chris before his illness but realized quickly that he had become a new man. People would recount stories of the former Chris with great pride and a sense of community. Even with the difficulties of names, recollection of facts and dates, and the visual dis 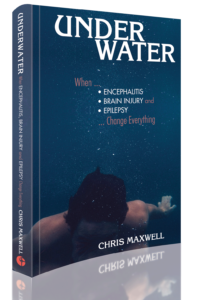 comfort it caused Chris, people continued to crave his investment in their lives. He was still their pastor.

Chris mourned his prior self, was frustrated at his limitations, longed to work all day without naps, and wept at the pain that his family had suffered. Yet in all of this, I witnessed a man who grew and accomplished greatness. Chris worked extremely hard to overcome and would constantly strive to improve. There were many days when Chris pushed too hard and would have to stop and regroup. These setbacks would become fuel to move forward. Chris would comment daily on his small victories in the overwhelming flood of God’s Grace.

Throughout this crippling journey of recovery, Chris became a new man. He found his purpose and voice—not as a victim, but as a survivor and overcomer. The man I know puts people before programs, forgiveness before frustration, healing before hate, and joy before mourning. Chris will be the first to recognize that he is a miracle.