Q: Dr Moon, give us a summary of your new book, From Plowboy to Pentecostal Bishop: The Life of J. H. King.

A: From Plowboy to Pentecostal Bishop is a biography of Bishop Joseph H. King, one of the most important leaders and theological thinkers in the early decades of the North American Pentecostal movement, and administrative head of the Fire-Baptized Holiness and Pentecostal Holiness Churches for some forty years, 1900-1946. In the words of one reviewer and endorser, Dr. Steven Studebaker, a professor of historical theology at a Canadian seminary, the book is “both sympathetic and critical, both comprehensive and detailed. … It brings to life an era of North American Pentecostal history and spirituality that should never be forgotten.” The last chapter deals with Bishop King’s legacy relative to his family, the Pentecostal Holiness Church which he superintended, and the global Pentecostal movement. I conclude that his main legacy for the latter two was his vision for and efforts to achieve three things in the Pentecostal Holiness Church: comprehensive, denominational-sponsored Christian education (elementary, secondary, and college-level), an adequately trained clergy, and spiritual balance in terms of the early Pentecostal problem of religious “fanaticism.” These emphases were somewhat unique for an early Pentecostal church leader, and they are the reasons why, drawing from a 1940s primary source, I label King “the Pentecostal aristocrat.”  .

Q: What was it like to write this book? 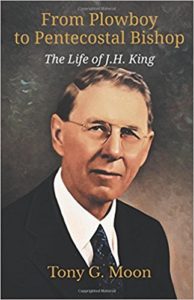 A: It was both fulfilling and challenging. I have been studying Pentecostal history and theology for a long time, but researching the early history of the movement, particularly that of the pre-1911 Fire-Baptized Holiness Church and the Pentecostal Holiness Church, from the perspective of the life and viewpoints of one important leader, namely, J.H. King, was eye-opening in some ways in terms of insights derived from using such a case-study approach. It was also fulfilling from the standpoint of the spiritual nurture I received from studying King’s life and how he dealt with the multitude of struggles and setbacks he experienced during his long life and sixty years of Christian ministry. Producing this book was also quite a challenge. The amount of primary and secondary literature that I had to carefully peruse was enormous—my King research began in earnest in 2004. It was a major perseverance test. I sometimes got disheartened trying to squeeze in this work with my other responsibilities at Emmanuel College in Franklin Springs, Georgia, at home, and in the pastorate, and toward the end of the process relative to computer software issues.

Q: What do you hope readers will gain from reading From Plowboy to Pentecostal Bishop?

A: Among other things, I hope readers will gain an appreciation for Bishop King’s shortcomings as well as his strengths and achievements. One reader, a retired pastor, recently thanked me for “humanizing” the man because all of his life he had idolized the Bishop as a super-saint who (of course) lived above the fray of normal Christian struggles and therefore must not have experienced the everyday ups and downs of the average believer. I cover King’s faults and failures as well as his positive qualities and accomplishments. Another reader, a precious Christian lady who I know personally, described working through the book as like reading a Christian historical novel that’s factual instead of fictional!

Q: How can people from various Christian traditions benefit from reading this?

A: They’ll learn much about one slice of the early history of a movement (Pentecostalism) that has for decades been recognized by Christian missions and church growth experts as the fastest growing missionary movement in twentieth- and twentieth-first century world Christianity.

Q: You’re known for your deep study and knowledge of Scripture. You’re also known for your laughter. Do you have any funny stories to tell us related to the book?

A: Occasionally, Bishop King could be quite humorous in his writings. One example was his description of his seasickness during his trans-Pacific voyage to China in 1910. It was both pitiable and comical. Another instance, from 1927 when he was Editor of the Pentecostal Holiness Advocate, the denomination’s periodical, was the following complaint he voiced about “doctoring ragged manuscript” (correcting the contributions sent to him for publication consideration): “As Editor, I get an insight into the intelligence, literacy, and to some extent the measure of grace that the church possesses, and there is nothing more discouraging. Oh, it takes grace to endure it.” This humor was both hilarious and abrasive (he could do that too!). Another funny story he related was from his visit to the Holy Land in 1911. It was self-deprecating (which was typical). It was about a failed evangelistic street meeting in an Arab village near Bethlehem. He and his partner, a dentist missionary from Tennessee, were at a loss of words about how to start the service and ended up being heckled and laughed at by a crowd of Arab youth.

Q: How can people pick up a copy?

A: My goals in writing the book were basically twofold. One, I wanted to further knowledge about Bishop J.H. King, the early Pentecostal movement, the pre-1911 Fire-Baptized Holiness Church he led, and the post-1911 Pentecostal Holiness Church he guided. Two, I wanted to inspire Christians to the kind of faithful, persevering service to God, Christ, and the church that Bishop King exemplified so well during some sixty years of Christian ministry.